Chapterhouse of the Fallen

Quest Chain: Infiltrating the Burning Dead - Operation - Dead Gnomes Tell No Tales. . . Or Do They? - Run, You Fools! - A Matter of Life and Death

Menizzia is mezzable, which gives you plenty of time to deal with adds.  While mezzed she doesn't do her annoying AE.

Firstly, personally, this wasn't clear from the event text; you want to be in FRONT of Taros, not behind him.  You need to stay a good distance ahead of him, if he catches up to you, you (or a merc if they're lagging behind - use passive mode and run ahead to force them to move up) get instantly death touched.

First Half of the Mission
The directions to run through this are: Facing into the room where Menizzia spawns from the zone-in-room, there is a tunnel to your right hand side. Once you kill the mobs that she spawns, you'll want to run into that tunnel, at the end is your first fight (yellow dot).  Once that dies, the wall at the end of the tunnel will collapse and you'll be looking into the next room.  The three mobs in that room will spawn right in the area that you are in when you spill out of the tunnel (black).  Kill them, then turn to the right and run to the far end of the room.  The tunnel on your left will have opened up and the five mobs (blue) will spawn just inside the entrance to that room. After killing them, turn left and run to the far side of the room and into the tunnel.  There is one mob at the end of that tunnel (orange/tan/brown), and then the last group of six spawns in the middle of the final room (green).

The more mobs you get, the easier they are to kill as far as HP is concerned, the groups of five and six die fairly quickly while the single mobs have a decent bit of hit points. They do still hit hard, so popping a defensive on the five and six mob waves isn't a bad idea unless your tank is rambo.

Taros takes the same amount of time to make it to the final room, it doesn't vary by how fast you kill the mobs.  That means the best way to go about this is by getting a good head start.  We did the mission with a knight, a monk (me), two zerkers, a mage and a cleric merc.  I burned the first mob, the mage burned the first group and one of the zerkers burned the second group.  Short re-use discs here, save the big stuff for the last boss.

Second Half of the Mission
Once you beat the waves and outrun Taros, the fun starts.  Menizzia is a witch, put simply.  She doesn't hit overly hard, but has two key mechanics that are both frustrating and obnoxious. She will spawn adds during the fight that must be killed.  If you don't kill them, you'll get hit by a huge AE (50k?) and it will heal her a significant bit for each mob she despawns.

The other mechanic that needs to be followed his her emote. The text from my audio trigger is 'Menizzia begins to pulse with the fury of the dead. You should probably run away!'.  When she does this, you have less than ten seconds to move FAR away from her or you take a 150k, unblockable nuke (no DA/spell block runes).  She will kill pets, mercs, tanks, healers, gnomes and even iksar with this steamy pile of horse-*halfling*.  The KEY part of this is she roots herself when she does it, meaning the tank can get out of range too.

Misc info:
*If you're using a merc healer or DPS, the best way to set it up is to keep one player at range and have them be the one to use the merc.  They start at spot2, designating where the group is supposed to run when the emote goes off as well as keeping the merc out of range of said emote (because it will kill them, and this event is balls without a healer)

*If you completely wipe, you need to drop the mission and re-start.  Once Taros leaves the first room, there is a lightening aura that will death touch anyone walking into it, even after the event resets.  I suspect this is a bug, but if the mission is a wipe, safe yourself an extra death and just drop the mission, summon corpses and restart.  If the group wipes on Menizzia but someone lives and can rez the group back, that's fine, this only applies to a complete wipe that requires a corpse run. 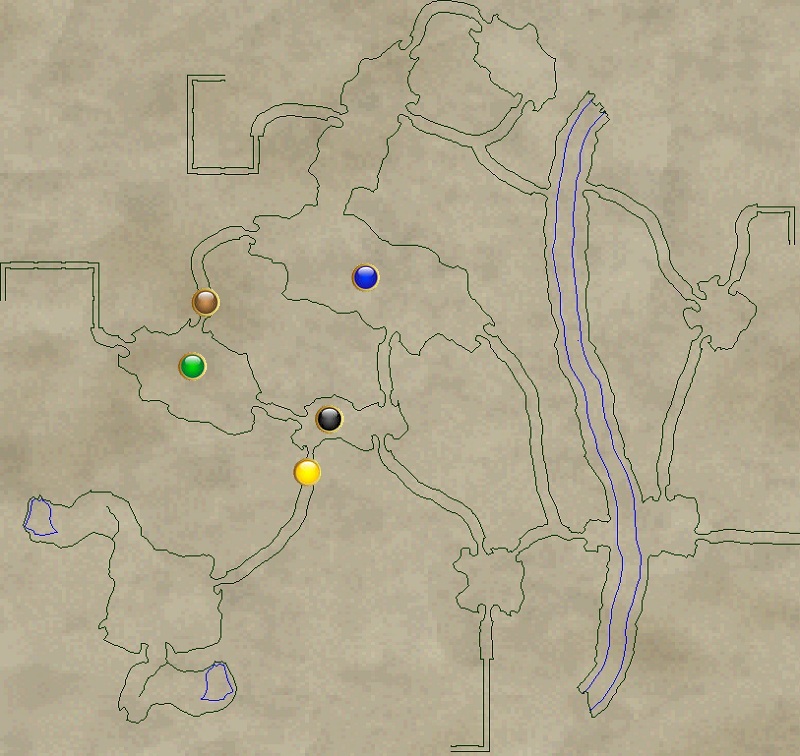